The Kola Peninsula and Russian Lapland

Welcome to the Kola Peninsula

The Kola Peninsula is the northernmost territory of European Russia, situated north of the 66th Parallel. The territory extends 550 kilometres from west to east, and 400 kilometres from north to south. The Peninsula is bordered by the White Sea in the southeast and by the Barents Sea in the north and northeast. Karelia lies to the south, Finland to the west, and Norway to the northwest.

The bulk of the Kola Peninsula lies north of the Arctic Circle. Winters are cold but not frigid; summers are warm but not hot. January temperatures range between -8 and –13oC; July temperatures range between +12 and +20oC. The legendary Polar Night blankets the Peninsula during December and January, when the sun hides below the horizon day and night. In the city electric bulbs might light the way, but in the wilderness darkness prevails. However, comes summer, the Kola Peninsula is transformed into a land of midnight sun. Throughout June and July bright sunshine illuminates the land around the clock.

The region is covered by tundra, forest-tundra and taiga (dense forest) and is home to a wide variety of flora: more than 650 species are found here. Trees include three types of spruce, four types of birch, as well as pine, rowan, and alder. The Kola Peninsula is also rich in fauna. Wildlife includes reindeer and elk, brown bear, wolf, fox, Arctic fox, ermine, and wolverine; birds include wild geese, duck, ptarmigan, hazel-hen, grouse, eider and peregrine falcon. Various representatives of the salmon family can be found in plenty in the lakes and rivers. The "King-Fish" (pink salmon) leaps through river rapids on its journey from sea to spawning ground. The Kola Peninsula boasts more than 130,000 lakes and rivers.

A number of mountain ranges rise out of the western and central parts of the Kola Peninsula. The largest of these is the Khibiny Tundra, possessing a maximum elevation of 1200m (Mt. Judychvumchorr). The Lovozero Tundra is made up of rounded mountains with plateau summits, the highest point being Mt. Angvundaschorr at 1127m. Both the Khibiny and the Lovozero Tundra are rich in exotic minerals. Jewel-like lakes, transparent springs, majestic waterfalls, fantastic rock outcrops and stunning mountain vistas can be found in these regions. At lower elevations, virgin forests stretch for huge distances. 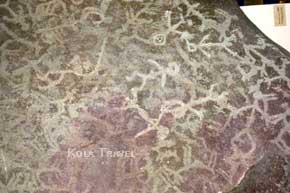 The first inhabitants of the Kola Peninsula arrived over 10,000 years ago. Remains of ancient civilisations have been found here, with the earliest finds thought to date from the Mesolithic Period. Petroglyphs were discovered on the banks of the Panoy River, one of the Peninsula’s longest rivers. These paintings are the oldest memorials of rock art among ancient peoples. For ages people continued to come to this sacred spot, and painted more and more pictures. The Petroglyphs depict the life and religious symbolism of the region’s inhabitants; however, many questions remain unanswered regarding their origin and the people who created them. 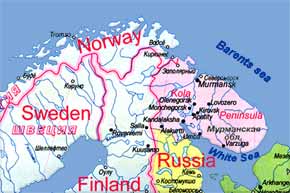 The tundra's of Kola