Cities of the Kola Peninsula: Kola

Kola village is situated a few kilometres south from Murmansk on Kola Peninsula. It was mentioned for the first time in notes written by a Dutch merchant Simon Van Salingen in the XVI Century.

The settlement was founded by Pomors and Russian merchants and had a wholesale trade with the English, Swedish, Norwegian, Danish and Dutch dealers from Kola. Kola is situated on the cape between the Kola and Tuloma rivers, exactly at the place where they both are falling into the Kola Inlet. Kola is an administrative centre of the agriculture-oriented district where population is occupied mostly in cattle breeding for dairy production, reindeer and poultry farming, breeding minks and polar foxes for furs and catching fish. One of the fishery ventures "The Energy" was founded in Ura-Guba by Finnish colonists in 1864. The Nizhnetulomsky, Verkhnetulomsky and Serebriansky Hydro Power Electric Stations have been built together with the Finnish companies "Imatran Voima" and "Pessi Peca". Brother towns are Hammerfest (Norway), Ivalo and Sodankula (Finland). The church was built in 1814. It is the first stone building on the Kola Peninsula.

The first record of pomors settlement on Kola village go back to 1264. In the end of XV -beginning of XVI centuries the trades of pomors on Murmansk coast have acquired constant character. The arrival of Feodor Mihajlov became the next page in the history of Kola village. Being the monk of Solovetsky monastery, Feodor was kindled by desire of "deserted tacit dwelling" - of becoming a hermit. At first he has settled in a "wood-goblin' lop", where, in 1526, he probably participated in construction of church in Kandalaksha and then, by seaway, set off to the mouth of the Kola river. Here, he met the old monk Mitrophan, who lived alone. Together they have lived among the Lapps for several years. Feodor Mihajlov began to introduce the pagans to Russian faith. Shortly after the Lapps living on Kola and Tuloma rivers have expressed a desire to accept Orthodoxy. In 1932 the group of Lapps has arrived to the Great Novgorod to archbishop Makarij with the request to arrange temples and to send priests. And for a long time after that, Feodor Mihajlov had been explaining the fundamentals of a Christian faith to the Lapps, teaching them the Gospel and translating language of a pray into Lappish language.

In 1550, to protect trade people and fishermen from attacks of the Danish robbers, the stockade town Kola was built. And in 1582 the group of strelets (soldiers) and the governor of province Averkij Ivanovich Palitsyn - the future coenobite, cellarer of Troitse-Segiev monastery and associate of Minin and Pozharsky in liberation of Moscow from the Polish yoke were directed to Kola. The 19-headed Cathedral of the Resurrection was build in Kola in 1681-1684. During 170 years the temple is famed for its beauty and greatness all over the Russian North. The glorious pages in a history of Kola are connected with warding off the attacks from the Swedes in 1589, 1590, 1591 and 1611 and from the Englishmen in 1809, 1810 and 1854 by the inhabitants of Kola.

Pomors are an ethnical group of the Russian people which came and settled on the coasts of the White and Barents seas eight Centuries ago. Most of them have arrived from the Novgorod lands. The word "pomor" comes from the word "pomorje" which means "sea coast". The northern part of Germany which is populated by Slavic tribes had the same name "Pommern" and it was not changed when German tribes arrived and settled in those parts. The Russian Pomors have their own distinctive and original way of life and they still have in their conversational Russian language a thick layer of the ancient Russian language. The Museum of Pomors mode of life is opened in Kola.

Today, Kola inhabitants not only work and live by cares of today, but also try to take care of the nature, the monuments of their history and to revive spiritual and cultural life of the land. 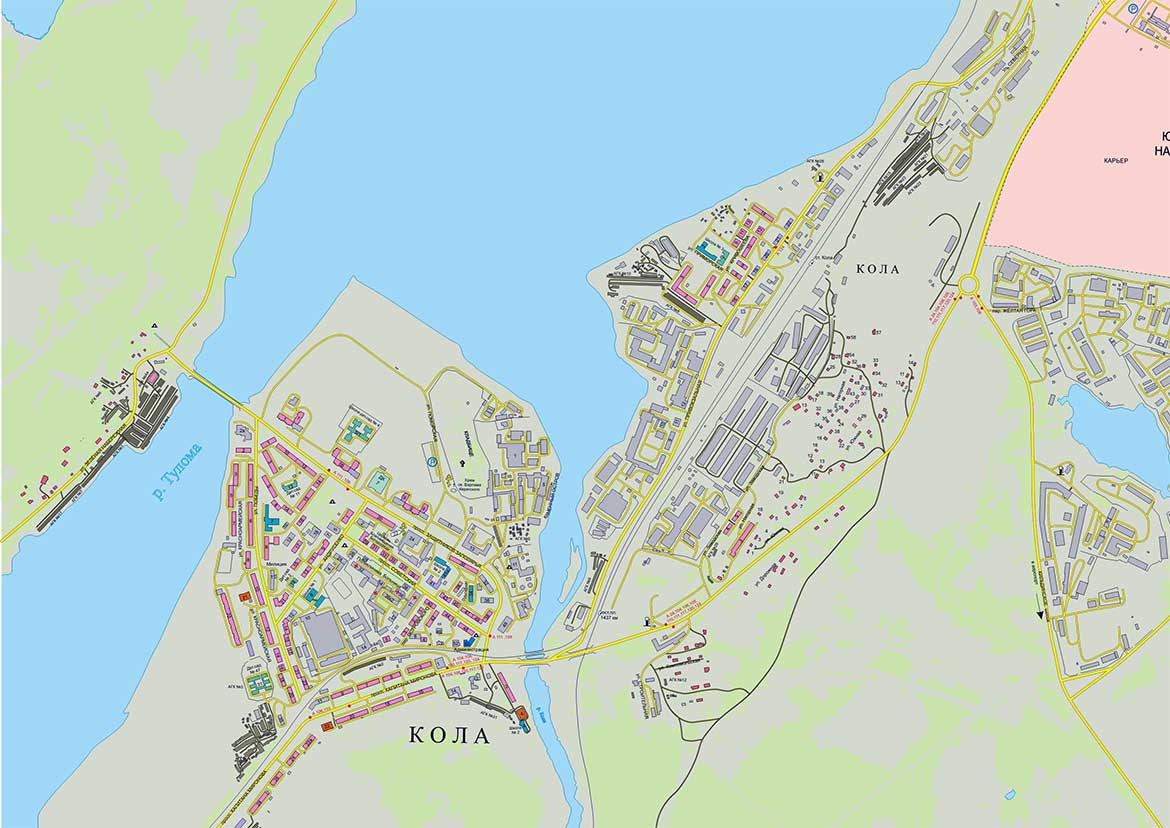