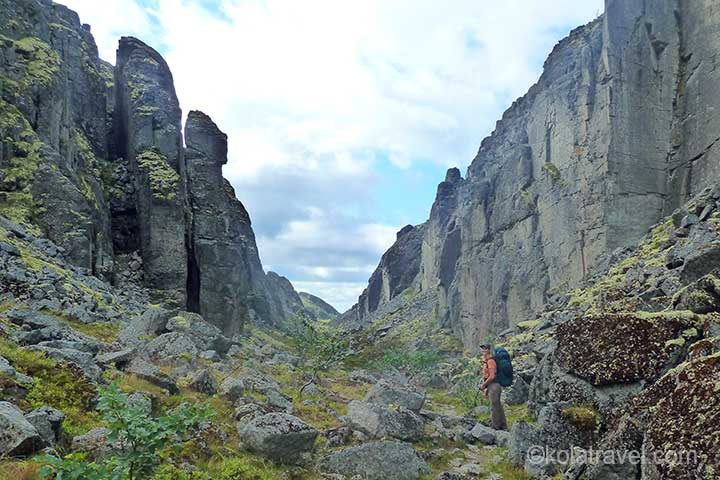 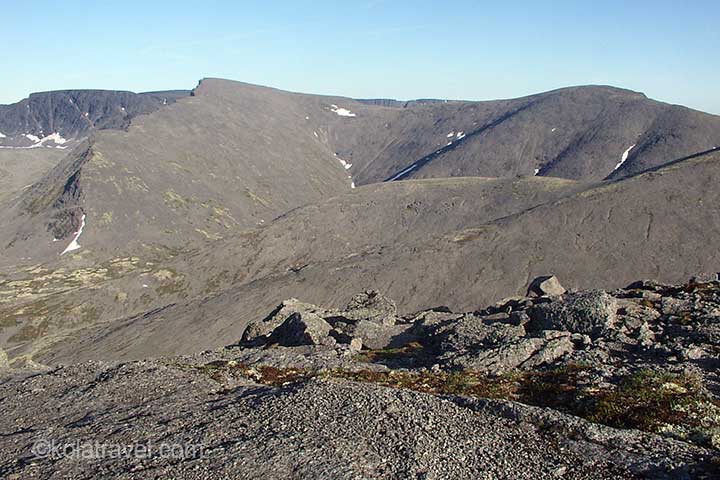 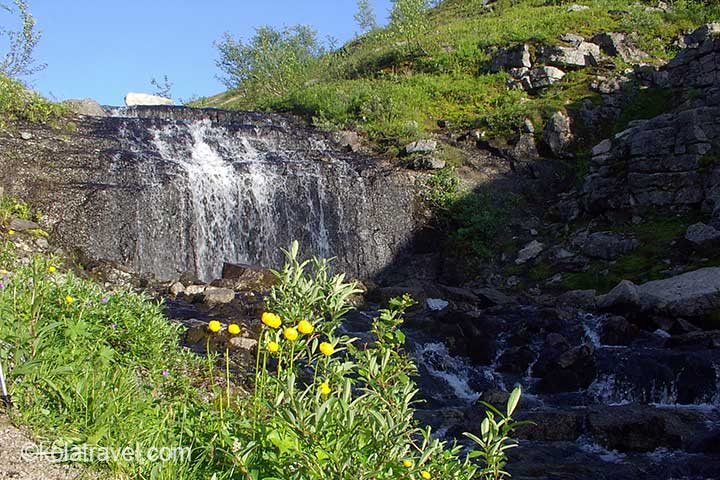 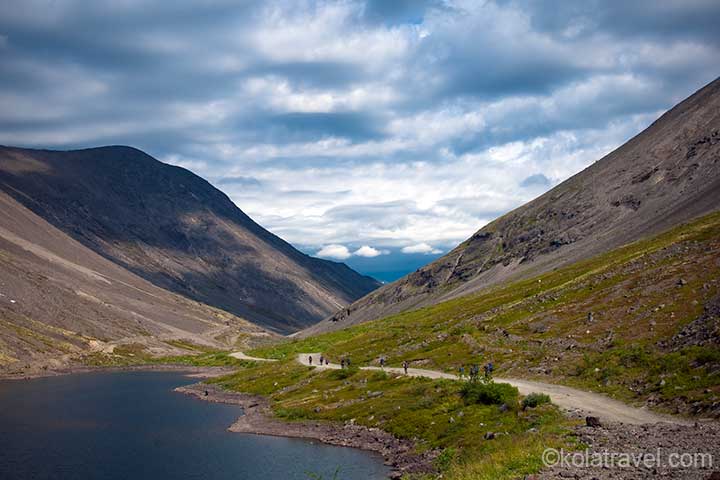 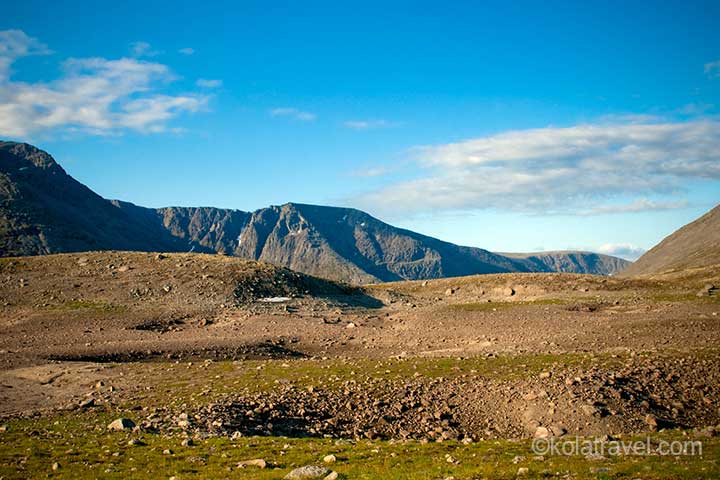 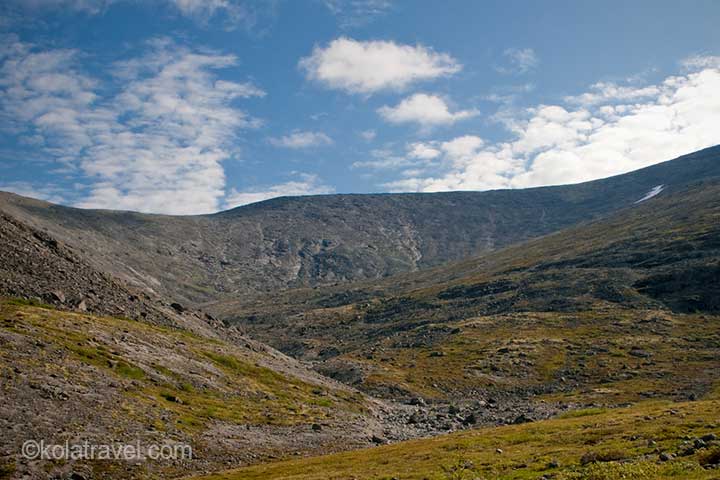 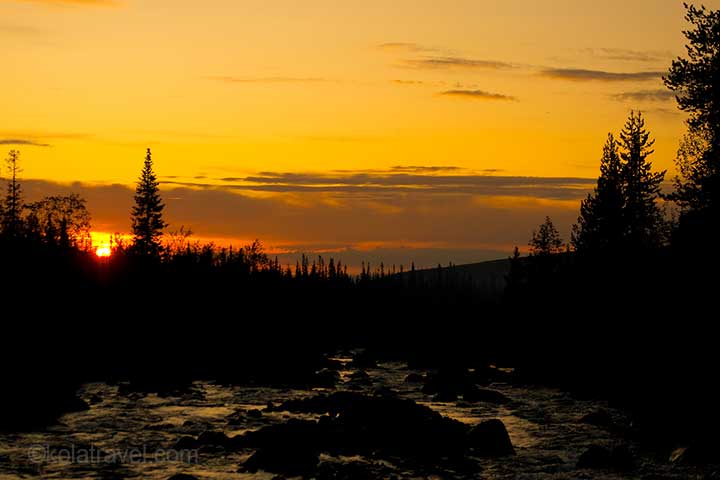 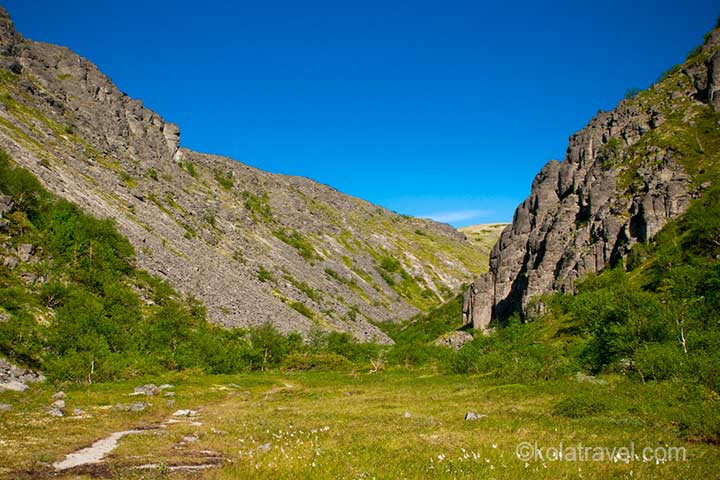 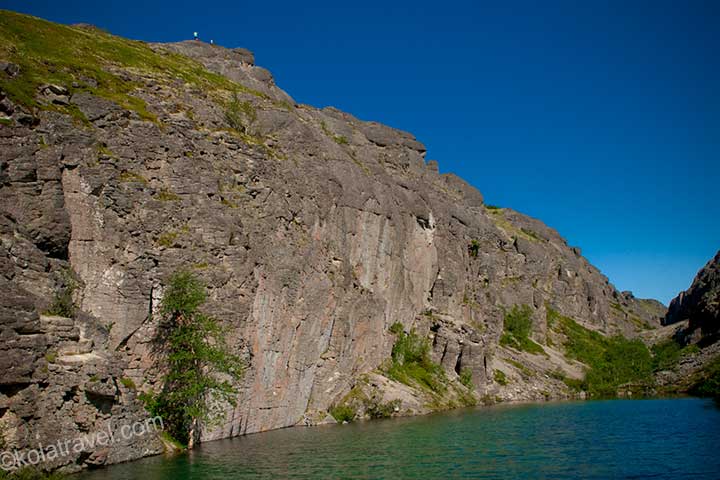 Welcome to the Khibiny Mountains on Kola Peninsula

The rocky and treeless Khibiny Mountains are situated north of 67-th parallel, beyond the Arctic Circle on Kola Peninsula in Russian Lapland. This is the highest land mass in the Kola Peninsula the summits of which are dotted 800—900 meters above the surrounding hilly plain. The highest point in the Khibiny (Judychvumchorr Mountain) is 1200 metres above sea level and is also the highest point in the Kola Peninsula. In clear summer weather the Khibiny Mountains can be seen from many miles away, from the Kandalaksha tundra in the south, the frontier heights of Kovdor in the west and even from the hilly banks of the Voronija River in the north. The climate in this part of Russia is peculiar in so far as that thaws are frequent in the winter but in the summer and early autumn frosts are not uncommon, especially in the beginning of June and at the end of August.

Winter lasts about seven months every year in the plains and the month longer usually on the mountains but the temperatures are not so low as those in the similar latitudes of Siberia. The climate of the alpine areas is considerable different to those of the nearby lowlands and valleys, for instance, in the plateau Rasvumchorr the winter lasts around 260 days. An average annual temperature is minus 4.3 degrees Centigrade and in the warmest month (July) never climbs past plus 8.2 degrees.
Winds on the plateau are gusty and sharp and can reach a speed of 40 metres per second. Snow storms rage around 190 days a year and daily variations of the atmospheric pressure are very sharp the average being around 644 mm of mercury with an average annual precipitation of 1494 mm of which about 919 mm is snow.

The vegetation in the Khibiny Mountains area is disposed into distinct zones. The forests are not higher than 370 metres. The forest-tundra zone spreads up to 450 metres, the alpine tundra up to 800 metres and beyond this is there is a Arctic desert. The Khibiny Mountains are the geographic centre of the Kola Peninsula region which was in former times a remote outlying district of Russia, inhabited by severe Pomors (coast dwellers) and mysterious Lapps. Remote Murman, the "World's End" washed by the waters of the White and Barents Seas was developing slowly only from the coasts, at that time. The first information about Khibiny is reflected in literature concerned with the XIX-th Century Russian academician A. M. Middendorf who in 1840 had noted the uncommonness of rocks forming the mountains. The geologist N. V. Kudriavtsev in 1880 and the expeditions; of the Finnish geologist V. Ramzai in 1887—1892 had commenced an exploration of Khibiny but valuable and useful minerals were not found until the XX-th Century. First pieces of apatite ore have been discovered at the foot of Kukisvumchorr Mountain in August of 1921 thence the outcrops of this ore were discovered in 1922 within the Apatite Bow where the deposits and widely known layers of Kukisvumchorr, Poachvumchorr, Apatite Circus and Rasvumchorr are located. Geologists had already reported about the industrial importance of Khibinian apatite deposits in 1923 but the exploitation was not started until 1926.
The town of Khibinogorsk was also built which at the request of the townsfolk in 1935 was renamed to Kirovsk. The speed of development in those days was astonishing as was the speed at which the new town grew. In 1930 population was 500 and in 1932 48.000 and it must be noted that in 1920 the population of the whole of the Kola Peninsula was only 20.000.

The amazement of the XVII-th International Geological Congress members who visited Khibini in 1937 is under stable. Over 110 minerals (and 18 of theme were absolutely unknown before) have been discovered in this area and minerals like Murmanite, Wudjavrite, Ramzaite, Juksporite, Fersmanite have been included in the scientific catalogues since that time.
From 1930 on the shore of Lake Maly Wudjavr the construction of the Mining Station "Tietta" (in translation from Saami Language it does mean "Science") had been started. By April 10, 1932 the Mining Station with a museum, library and scientific laboratories had been inaugurated.
By 1949 the Kola Branch of the Academy of Sciences of the USSR. had been established and the first institute of this Branch, the Geological Research Institute was officially established in 1951 but its history actually started from the "Tietta". The Kola Branch of the Academy of Sciences is the biggest scientific centre beyond the Arctic Circle. In 1975 a museum of Arctic study and exploration history attached to the Geographic Society in Apatity was opened. Many valuable material illustrations of the territories history from an ancient time till the present day are in this museum. In former times uninhabited Khibiny are surrounded today in the South by a semi-circle of towns and settlements like Apatity, Titan, Octobersky, Shuchiy, Imandra, Khibiny.